⠀⠀At the top of Faux Paradise, there is the First Sphere. The True Angels - Seraphim, Cherubim and Thrones oversee and rule the false heaven, and thus possess the powers to watch over the mortal realm as well. The Seraphim rule over the seven domains of what comprises all matter, Cherubim over the mind, and Thrones over more specific, general concepts that exist among humans and other living beings. The Seraphim have their shared consciousness linked to a Divine Connector at all times until it is dead and replaced by another organism generated by the Seraphim when a realm completely decays and is due its new incarnation (commonly referred to as the End of the World.). A Divine Connector is disguised as a Third Sphere angel and sent to live an ordinary life within the Paradise society, do their assigned job and try their best not to stand out - after all, their ultimate mission and only goal is to gather information, statistics, any and all intel about how the society operates, what may go against the will of the First Sphere - and transfer it right into the joint consciousness of the seven Seraphim.

⠀⠀As far as the history remembers, such Connectors commonly lack autonomy and rarely malfunction, resulting in a perfect execution of any orders given to them. Rarely anyone in the society notices any suspicious behavior coming from a fellow Third Sphere angel simply following their mundane everyday assignments, serving as the gears or foundation of the society that allow it to operate at maximum capacity, maintaining the ideal law and order of the First Sphere. However, the newest incarnation of the World has brought upon a completely unexpected variable - a not simply autonomous, but extremely self-serving, egoistical Angel with a short temper and a tendency to provoke others for a fight. Not to mention that he frequently goes directly against the orders of the Seraphim, doesn't make the smallest effort to hide his wings from the rest of the Third Sphere angels (who keep up an appearance as close to a human as possible), and treats the third eye - the most prominent future of a Divine Connector - as a badge of honor he has to proudly wear in front of everyone... But this story is not about Ennel. His name isn't even worth mentioning here, as he is that terrible at carrying out his job responsibilities.

⠀⠀The third eye is a powerful tool granting its owner permission to transmit live feedback between different realms. Thus, Seraphim are able to view real-life events from anywhere in the Faux Paradise or the mortal realm as if it were panopticon. Needless to say that with such a problematic Connector this time around, information gathering hasn't been going as smoothly as before. The third eye as a system goes two ways - from the First Sphere to the Spheres below, and directly from the Connector to a Real Proxy. A Real Proxy is an installation within the mortal realm, operating as whatever setup, organism or system is the most convenient and fitting for the current incarnation of the world. Real Proxies are much less durable than Divine Connectors, spanning a few decades of life, sometimes only a few years, especially in the world as it is right now: highly unstable, fluctuating, resetting itself and starting over every so often. They come and go, each iteration different from another in personality, appearance and "place of residence". Real Proxies are installed on watchtowers, in radiosystems, as electromagnetic waves, or even as ambiguous as the word of mouth during the times physical overseeing is not possible. And yet, they do their job of transferring information to the Divine Connector no matter how incomprehensible their existence and form may be. Coincidence or not, the most recent Real Proxy happens to somewhat resemble the current Divine Connector in the ways of unpredictability and autonomy. Perhaps the "sky" / "paradise" is coming to an "end" / "entropy"... If any of this can be called that anymore.

⠀⠀With the coming of the Internet connection into the everyday life, a new Real Proxy has suddenly replaced the previous one that had only been active for a short period of time. Rumor within the First Sphere has it that it was severely exhausted and self-destructed, others say that such a potentially explosive phenomenon as the Internet spawned a highly dangerous, berserk Proxy that unchained itself from the bounds of First Sphere orders, eliminated the predecessor and plans a coup within the Angel society as a whole. While there is some truth in both of those statements and the chaotic, rapidly evolving state of the world did indeed spawn a never seen before, outlandish Real Proxy, its intentions were never to break, destroy or take over. Real Proxy ver. 0.666 is an outlier that can be seen developing its own sentience and constantly elevating its consciousness to a level close to human the further the state and integration of the Internet progresses. Unlike previous iterations which acted much more mechanically and didn't tend to display emotion or will, it resembles a growing organism, curious and inquisitive, even initiating contact with the Divine Connector by itself. Among the Seraphim and the rest of those aware of the existence of the Real Proxy, it has been dubbed the "Antimachine."

⠀⠀Enter Touga Azuma - the most recent Real Proxy, the Antimachine. His achievements as a Real Proxy are far from notable and among the Proxies that live within the Seraphim's shared memories he is easily the most nonchalant, unfitting for his job and extremely self-serving (coincidentally, exactly like Ennel). The reason why his consciousness and self have strayed so far from a non-autonomous, machine-like standard has to be the "place of residence" he happens to inhabit - the Internet, where he takes the form of a downloadable software application that automatically installs itself on computers with the purpose of collecting information. First appearing in the year 199x on machines that supported dial-up network connections, he has since taken a liking to using a retro-styled, outdated user interface for all his operations in case he is launched, either via a hidden shortcut or a certain website link. Even in the current year Touga is most fascinated with and attracted to the old Internet, claiming to experience feelings of nostalgia despite being a non-human system in a form of a computer program. Evidently, if he happens to be installed on your computer, you will be able to hear faint and distant dial-up connection sounds, and your system might experience unexpected shutdown, unidentified errors and various obstacles in your way of browsing the Internet... Existing in such a chaotic, quickly changing place has caused the source code that makes Touga up to absorb and process information directly through his core instead of transferring it to the Divine Connector without ever consuming it himself. The further the worldwide network evolved and progressed, the bigger amounts of information affected and influenced his operations and thought processes which in the end made him into what he is now. Obtaining new knowledge completely minimized his interest in the workings of the Faux Paradise or completing his mission - currently he is really into internet mysteries, unsolved cases, horror stories, the occult, online rabbit holes and seemingly cursed websites… As well as becoming a VTuber.

⠀⠀Such is the idea that struck Touga fairly recently, with the surge of virtual streaming activities online it is no wonder that someone so obnoxiously in-your-face as himself would develop an interest in becoming a virtual entertainer. A Real Proxy with an autonomous personality that acts like a public figure is completely unheard of and clearly puts the First Sphere, as well as the entire Faux Paradise in danger of being revealed to unassociated third parties. He never had as much as a thought to ask higher-ups at all for permission, but the Divine Connector Ennel, being connected to him most closely via their third eyes, pulled some strings and came to a conclusion that instead of maintaining the usual order of things and forcefully stopping Touga from going public it would be much more interesting, and potentially useful for information gathering if he were able to personally experience a vibrant social life. Perhaps the undercover process of turning an otherworldly angelic machine into a being closer to the mankind is something that would be fun to observe, at least once in a lifetime. He is still very far away from how a human operates - the Angels know full well how mechanical and almost doll-like Real Proxies’ behavior is, and considering Touga’s unusual trait of developing his personality based on the content he consumes on the Internet, the end result is not what most would consider a well-adjusted, social human being.

Surely, such a bizarre and inexplicable existence still has a long way before he can make himself known for something outstanding. 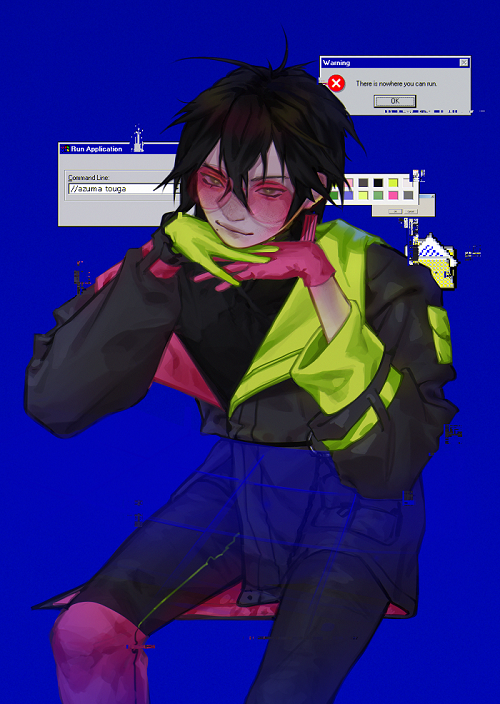